Born free in 1815 in Baltimore, Maryland, John B. Bailey was one of the first black Americans to use sports to carve out a living and avoid drudgery. As a sparring master and an expert with pistols, Bailey had unique skills he could market.  He also had a practical reason to master the art of self-defense and pistol shooting. Physically defending himself could have been the difference between his freedom and bondage in Baltimore where free blacks had to worry about being kidnapped and sold into slavery. Like all free blacks in Baltimore, Bailey faced the threat of racism in a slave society that limited his rights, economic opportunities, and constantly put his life in danger.

When Bailey opened his first gymnasium in 1838, he was one of a few men in the nation that had their own gym. During the 1830s he taught sparring lessons in Baltimore and also traveled to Boston and Philadelphia for exhibitions. In Philadelphia, he sparred with the black sparring master Joseph Battis, who ran a sparring academy and barbershop. In 1846, Bailey opened “Bailey’s Gymnasium,” where taught sparring, gymnastics, and operated a pistol gallery. At the time it was illegal to sell “gunpowder, shot, or lead” to a free black person, mulatto, or slave. 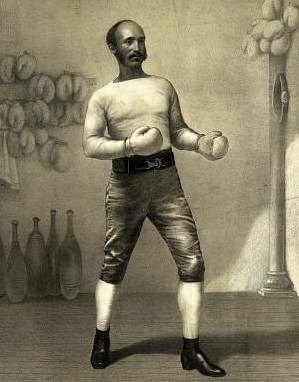 Although he trained black men like Harry Sallars, who eventually became a boxing champion in Australia, Bailey’s success derived from that fact that he geared his business toward white middle-class anxieties and became a leader in the physical culture movement. The growth of the American physical culture movement started as an urban response to rapid industrial change. Health seekers believed industrialization weakened Americans, and they urged that individuals needed to transform their bodies to battle urbanization. Bailey only had one competitor. As a business owner, Bailey smartly used the language of health reform to attract customers. He ran ads offering sparring lessons and training in gymnastics, telling his readers about the “advantages which accrue from a course of Gymnastic exercise potential healthy qualities of exercise,” like a “promotion of a healthy and vigorous state of system,” “muscular powers,” and he suggested that working out could help fight off “diseases of a nervous and dyspeptic nature.” He also told his potential middle-class clients that fitness was essential for those who lived a “sedentary lifestyle.” Even though he thrived as a businessman, the tightening legal restrictions, the Fugitive Slave Law, and continuous oppressive racism pushed him out of Baltimore.

In 1851, he took his athletic and business skills to San Francisco, California. When he arrived in California he was only one of 2,000 free blacks to complete the journey voluntarily, and one of 18 blacks to open a barbershop in San Francisco. Along with his barbershop he also operated a pistol gallery and taught sparring lessons. For whatever reason, he left San Francisco, returned to Baltimore, and then took his family to Boston in 1853. 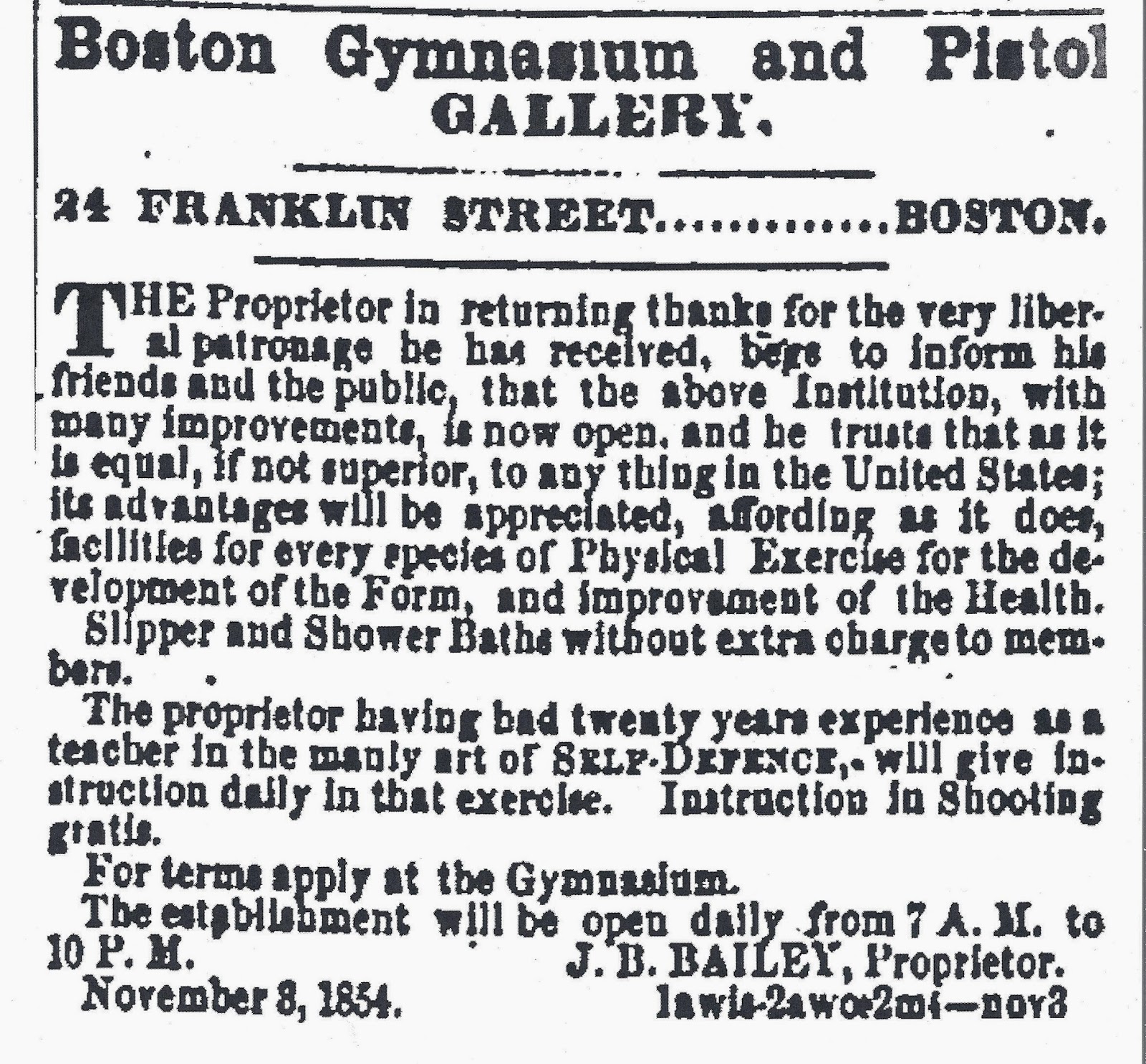 In Boston, along with black gymnasium owner Patton Stewart Jr., Bailey became a leading figure in the physical culture movement. He taught sparring lessons, operated a pistol gallery, bowling alley, and had one of the few facilities where men could lift heavy weights. For most of the 1850s Bailey and Stewart operated the only two middle-class gyms in Boston. In his book Colored Patriots of the Revolution, the black leader William C. Nell wrote “it may be noted, that the two most popular gymnasium galleries are in the proprietorship of J.B. Bailey and Peyton Stewart.” By the end of the decade Bailey’s real estate holdings jumped from $500 to $5000.

During the 1860s Bailey left the gymnasium and pistol business and opened up a sparring academy. He operated one of the most successful sparring academies in the nation until his death in 1886. As a sparring master he gave lessons and hosted numerous sparring exhibitions, including exhibitions with his friend Aaron Molienaux Hewlett, the first black teacher at Harvard. Molineaux taught physical culture and also owned a gymnasium with his wife in Cambridge. During his tenure in Boston, Bailey’s most successful student was the Colored Heavyweight Champion (1883-1888) George Godfrey.

Most importantly, Bailey was more than just an athlete. He was an activist who worked to integrate Boston’s schools, fought for abolition, and was part of the Underground Railroad.  According to his obituary, his “career has in it something to admire and something to praise. He was a race man in every sense of the word.” “He was deeply interested in all movements which tended to lift up his people.” As a black athlete-activist, Bailey set the bar high for others to follow.
Posted by Unknown at 11:47 AM